‘Poo and Goo’…Dialysis Effluent and the Septic Tank 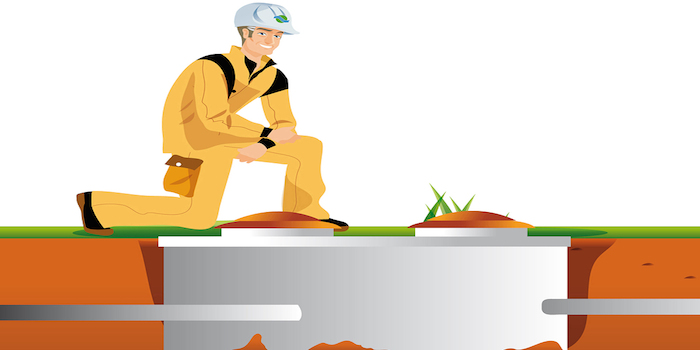 Dori Schatell recently asked me about an interesting question posed to Home Dialysis Central by the wife of a PD patient, and it has led me on a voyage of discovery and to places with which I was quite unfamiliar.

An edited version of the question reads: “ … since my PD husband began discharging his PD fluid into our septic tank, the septic and its distribution and outflow systems have been clogging up with a clear gelatinous material…does anyone know what it is—or whether it is related to the PD effluent?”

In situations where a town drainage system exists: all city and towns, and some small villages, the effluent is simply directed into the drainage system. But, for dialysis patients (both HD and PD) who live in smaller towns, villages and rural areas where sewerage systems are not available, waste disposal can be a significant issue.

There is good information for HD:

1. Pre-dialysis reverse osmosis reject water in haemodialysis is ‘good water’ and has many uses that are way better than simply draining it to waste. These are well described at our ‘green dialysis’ website: http://www.greendialysis.org

2. However, we have known for a long time that, the post-dialyser, saline-rich HD effluent should not be directed to a septic system , as the saline concentration of the effluent damages the bacterial and fungal ecosystems that are vital to septic tank function. Indeed, this information is given in the waste-water management section of our eco-dialysis website:.

For home HD patients, the message is clear: don’t discharge post-dialyser effluent to the septic!

But…the PD literature has no available information to guide disposal practices for PD effluent in unsewered situations. I went searching.

Hey, presto! While the dialysis literature is void on the subject, the wine-making literature is not! There is a wealth of information warning small wineries to avoid discharging the sugar-rich effluents generated by the crushing process into an anaerobic septic system especially a small one.

It seems that the typical total organic glucose content in the effluent from a winery varies from 1,000 to 5,000 mg/L , the latter being reached during the crushing season. This corresponds to the period when wine industry septics are at maximum risk of clog and fail. This sugar content is expressed as the biological oxygen demand (BOD) of the effluent, with a BOD of <5,000 being a regulatory maximum. A septic tank expert from the wine-growing region of Margaret River in Western Australia has informed me (personal communication: Tony, ElutiateSystems) that a BOD >5,000 risks the formation of a gelatinous co-polymer over the surface of the septic system and in its’ feed and outflow pipes, a gelatinous ‘goo’ rather like solid egg white, that clogs and damages the septic system, causing failure.

PD fluid effluent is far more “sugary” than that!

Combine this huge glucose-generated BOD, plus a small surface area system, plus a low total daily water flow (and thus a limited capacity for a dilutional effect), plus the presence in the PD effluent of some PD patients of a significant albumin concentration, plus the high sodium content of PD fluid (NB: note the issue with HD effluent), plus who knows what other factors—and it seems likely that this would set up a recipe for septic tank system failure.

The Department of Environment and Agriculture, Curtin University, Perth, Western Australia, has conducted research for the Margaret River wine region on this issue, published a series of fact sheets for the Wine Industry, and generated a series of effluent recommendations around septic system size relative to water flows, and “substance content” limits for the effluent, with one of those substances being sugar! See: WineWatch: Fact Sheet 4. Subsurface disposal of winery wastewater for small wineries. http://environmentagriculture.curtin.edu.au/local/docs/winewatch/Winewatch_Fact_Sheet_4.pdf

So, the short answer for PD patients may also be: Do not discharge PD effluent into a small anaerobic septic tank. It risks the rapid generation of a clogging co-polymer that blocks up the septic.

All that said, there are patient discussion sites where anecdotal evidence suggests that while some patients have problems with their septic tanks (as above), others have not. (http://ihatedialysis.com/forum/index.php?topic=26883.0,)Why there seems to be this disparity is uncertain. That it exists, however, seems sure.

But, as the Fresenius Report ‘ESRD patients in 2012 – A Global Perspectives’ states, there are ~252,000 PD patients exist world-wide and, as it is inevitable that many of these patients will live in regions where sewerage systems are scarce, this seems a relevant topic to better understand.

We have, as dialysis professionals, been abysmally slow to recognise and consider the environmental impact of the things we do. To begin to redress this short-coming, the effect of HD and PD effluents on septic tank function would seem a more than useful dialysis-related research project to conduct in cooperation with the septic tank industry. Until then, I can only guess that the high sugar (dextrose), sodium and albumin concentrations of PD effluent, and the high sodium content of HD effluent either feed the wrong organism populations and/or damage the “good” bacterial balance that is essential for normal septic tank function.

For those interested, there is a good PDF discussion of septic tank function at:

So, what should be done with PD drainage? In home HD in Australia, we recommend HD effluent drainage into an open or, preferably, a rocked pit—remembering that in Australia we use single pass systems (Fresenius or Gambro/Baxter) for home HD, systems that generate much larger volumes of post-dialyser fluid effluent. Perhaps this would be a good suggestion for PD as well.